Well - has everyone built up a million gazillion coins for the release today? I love this theme, so of course I'll need to buy it all.

Don't forget there are the new Limited Edition Wings. It'll be interesting to see how many of them are released and at what price. Hopefully they'll be somewhere in between where the Peter Pan Statue (too high) and the Golden Teddy (too low) were.

I'm just glad that I was lurking on the PS Forum and read what was going on. I thought they would sell out faster than they did but I was wrong (always lol). You got a good price for the wings WTG!!!!! So now your poor wrist can get a little break

Wonder what next/this week will be theme wise. I hope it is good

Does anyone know the names of these two PS items? 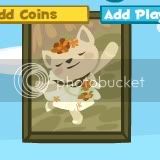 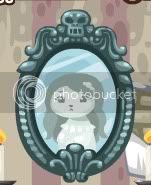 I've tried looking them up under every subject I can think of, but can't seem to find them. The picture in the mirror disappears and reappears.

Thanks Asynjur - they still don't come up on the PSE database I use, but kogaweb was cooperating today and I was able to find them there. Too bad they are CC items - I drool over that Haunted Mirror every time I see it.

On another note, I swear if they come out with one more car my head's gonna explode. Exactly how much room do they think we have in our houses - last I checked we didn't have a 10 car garage, lol.

The new wedding stuff is very sweet. (OK, even the car is cute.) I like the new lavendar pet biscuit too.

A limited edition wig, though, that's really mean. You'll be lucky if you get one, let alone be able to horde for multiple colors. Stupid pet games, always obsessed with "rarity"--do they think it brings in more revenue when people are disappointed they can't get something? Pet Society player numbers are sinking! The company isn't listening.

I like a couple of the new items, including more petling biscuit colors--I have a couple who like to change color from time to time. But I'm still disappointed with the petling situation. I bought 3 of the bear packages so I have 13 petlings total now, but they haven't actually increased the limit (the bear is just a workaround) so I still can't get a lion or a lamb.

Playfish really put there foot in it, some crazy controversies right now.

The Hideeni flags leave out many countries, 32 teams in the tournament but they only have 15 flags. They claim it's because the Hideeni code is made to have only up to 16 items, so they used the countries with the most Pet Society players. But people find their flag choices fishy. What they should have done--The flags should not have been used for the Hideeni items. If they wanted to do flags they should have had all of them available, for sale or shook out of trees or something.

And what's happened with the Arabian vacation package is bizarre. The package originally came with a tent, but now the tent has been removed. The strange thing is that people who bought tickets now without the tent, and wrote into customer service to complain, have been told there was *never* an Arabian tent! It was just a "mistake on the blog" but the item never actually existed. Customer service reps have actually said this, even though thousands of people already have the tent, not hacked or anything, I have one in my inventory right now. Even before the tent removal, the Arabian package had 1 item less than the other vacation packages. (I'm guessing 2 items were objected to by the lawyers, said they were too much like Disney images. One was removed cleanly, but the tent was missed.) What Playfish should have done, released only the Safari and Cruise tickets, said "more to come"--and then made 2 new items with no copyright issues for the Arabian package, and released that package when they were ready.

I will never understand why these games are in such a hurry to release bugged or otherwise problematic items. They have lots of other stuff coming out anyway, why not wait until it's right?

If you want the limited edition 13 CC wig you should hurry, don't know how long it will last. I'm hoping I can snag a second one, because the morons at Playfish aren't going to have the color available as dye. So I want one to dye and one to keep the original color. I think Playfish would make a whole lot more cash in the long run, though, if this wig wasn't limited and they made the dye available. This limited crap brings in short term money, but loses out a lot over time...

Got my thread removed by a mod on the PS general talk forum, lol. I saw several of these soccer bears in someone's house and posted the pic asking if people knew what it was. Turns out it must be hacked. The mod sent me a nice little pm saying the item wasn't "legal".

Whenever someone posts a thread asking about an item because they haven't heard of it, it's almost always hacked, LOL. I don't know why Pet Society puts all these items they aren't actually using in the game in the code. Sometimes they remove the whole thread, other times they just remove the picture of the hacked item. It's a pretty tightly regulated forum (which is a good thing in many ways, since big official forums are so prone to spam).

How very silly.Very cute though.Too bad is not available XD

Sprite would like another Happy Raccoon, anyone want to trade? I have an extra Forest Aquarium. Or we could trade something else.

No extra raccoons at the moment - I ended up buying mine on the forum as I'm sick of getting the same stuff digging and digging. I'll let you know if I get another though.

Edit: Found a raccoon for Sprite. And tell her she doesn't have to send anything back.

momtomaeghan wrote:No extra raccoons at the moment - I ended up buying mine on the forum as I'm sick of getting the same stuff digging and digging. I'll let you know if I get another though.

Edit: Found a raccoon for Sprite. And tell her she doesn't have to send anything back.

Thanks so much!!! Let me know if you're looking for anything.

Anyone know what the heck this is? The blue octopus bobs up and down and blows bubbles.

Jellyfish Bowl. Looks like it was a cash shop item according to kogaweb.

You can actually make money buying Win or Lose boxes right now and selling all the stuff. I've even come out ahead keeping a few items. So this is just a heads up--I'm sure they'll fix it so you lose money again soon enough!

Looks like they fixed the Win or Lose box, Sprite just got 10 pies in the face! Poor dear. Don't buy these now!

I can tell you exactly when they changed the Win or Lose boxes, lol. It was 6am central time. I had made a bunch of money buying them and then at 6:05 I suddenly got pies instead of prizes. So, I stopped buying them. I did make about 9,000 coins though - so thanks Asynjur!

Trying to get some support for my suggestion, please post!

Dragon petling coming out, and I don't think they're ever going to increase the limit. Sprite needs a tantrum animation..