I haven't tried getting any eggs lately.Got too annoyed last time i tried.Couldn't get any eggs X_X

I have yet to get any of the new eggs. In order to console myself for not getting them, I scroll lock myself with commons that I would like in order to help complete my scroll. One of these days I'll get lucky.

Let me know when you're not scroll locked niquae and I can try and hunt you down some of the new eggies.

I have a cb Hellfire Wyvern egg and a cb Sunsong Amphiptere egg and a cb Bright-Breasted Wyvern egg (three of the new breeds) that are up for grabs. I can hang onto them for a while if you need to get unscroll-locked.

Wow! You're good! I've only seen one of the new ones in the drops once. Of course, I missed. lol.

I can be unlocked at any time. I have a magi that I don't need that I can get rid of. I would appreciate any of the three considering I have not got any.

If we cannot meet up later today, I can probably log on tomorrow evening Eastern.

Which instant messenger do you use again?

I am on a lot of messengers - not because I use them often, but because every time I need to do a trade the person seems to be on a different messenger.

I'm on most evenings and late at night. I'll stay signed on to those two messengers so you can try and catch me on those. Or, if you're on a different messenger, let me know and I'll see if I have an account there.

Woohoo - got a Sunsong to niquae. Dae, I still have the other two if you want them (I might have another Sun as well). Let me know,

Don't know if you guys have seen it, but the purple dragons now have a male sprite.

Here's the new description:
It was previously believed that purple dragons were exclusively female, but this is not the case. Recent environmental shifts have revealed the existence of both genders of this breed. Female behavior is well known; they are primarily herbivores but will eat meat during mating season. On the other hand, very little is known about the behavior and habits of male purple dragons.

Yep. I think they came out with Mod Madness. I think the male purple looks pretty nice. I haven't gotten around to picking up more purple eggs to gender male though. So many goals for my scroll and so few egg spaces!

OK Dae, I transferred to your scroll the cb Hellfire Wyvern, Sunsong Amphiptere, and Bright-Breasted Wyvern eggs. Let me know when you guys want me to go hunting again.

TJ shrunk the Easter baskets and put trophies on our scrolls. The gold trophy is on niquae's scroll - mine only has 300 dragons on it so far. 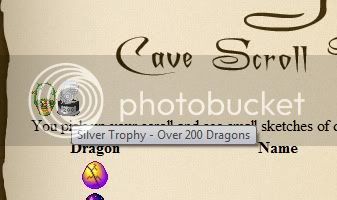 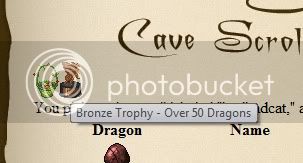 Ooh, is that silver trophy yours? I had not seen it before now. I like it. With your quick fingers, I would have thought that you'd already have over 500 dragons by now!

Whose is that bronze trophy?

With the shrinking of the Easter basket, I guess it is for sure that all that collecting of eggs was just for the fun of collecting them. It's a bit disappointing but the Easter eggs were pretty.

Both Maeghan and I have the Silver trophy. The bronze is on my other DC account - badbadcat. I intended to name all the dragons on that account with food names, and I have a list a mile long that Maeghan has made me, but I just haven't gotten around to it yet.

At the request of the spriter, frills can either no longer be bred OR have the same success rate as rares. They cannot be bred to any dragon of rare status such as the metallics, the legendary trio, and holiday dragons. If you have not noticed it yet, they haven't been dropping in the cave for a while either.

I do not know whether they can still be bred but someone got it third-hand that it could, and apparently there were reports about frills being bred although officially they cannot. This could simply be a case of having them bred right before the no more bred frills phase became fact though.

According to TJ's State of the Cave report, there will be no more new frills - period: http://forums.dragcave.net/index.php?showtopic=90973

Edit: m2m, do you think it'd be possible to have the images of the four new eggs?

Today I saw the speckled one and I was like..."What is that one again?"

before it occurred to me that I didn't have that one yet. Of course, by the time I clicked on it...*watched it fly by*

Here are the newest dragons. I updated the post at the beginning of this thread too. (There are images here under each name - it's just taking them a really long time to load.)

Bright-Breasted Wyvern Dragon
This egg is covered in speckles.
Female/Male 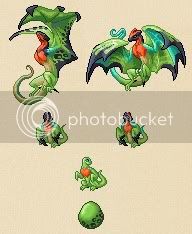 Hellfire Wyvern Dragon
This egg radiates the heat of a fell flame.
Female/Male 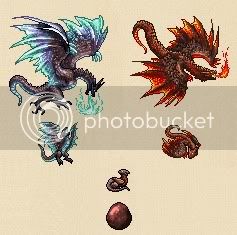 Nebula Dragon
This egg has a brilliant radiance coming off of it.
Female/Male 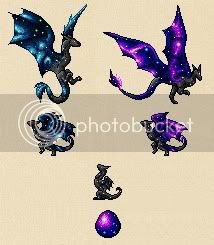 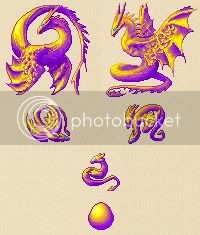 I think TJ gives the spriters far too much power. I say once you've designed an egg/dragon for DC, it should be owned by DC. Won't miss the Frills though - didn't think they were very pretty to begin with.

I need to update my picture list as well but i haven't been in the dragon mood lately.The fact that i can't garb any egg i do not have kinda killed the mood to play lol.I will update soon.Promise XD

Thanks for the pictures, m2m!

I don't know if I ever posted this but here are some Completed Requests that you can browse through: http://www.gopetsaddicts.com/your-current-game-obsession-f4/dragon-cave-links-and-information-updated-jan-2-2010-t11-180.htm

I don't know why but this forum does not like Opera. :\ I can't seem to post using Opera, which is my preferred browser. Finally got around to installing my other favorite browser, Safari, in order to post.

Thanks for the link niquae, that Wiki has some good info. Finally got a look at the Summoning dragon - not very impressed with it. It's so hard to get they should have made it really special.

This forum is acting up with a lot of the pics, whether I am posting or just reading other posts.

I finally named the sunsong you gifted me, m2m:
Eleniel's Sunsong of Maeghan.

Awww - Maeghan will be thrilled! Thanks Niquae!

I'm sure I showed this lineage before but I'm so pleased with how it turned out that I'd like to show the lineage as it appears farther down:
http://dragcave.net/lineage/vpFX

I'm thinking of using the horse dragons next, followed by a purple and then pink and finally white.